You probably already realize the criticality of Active Directory security today. With AD serving as the basis for many on-prem and cloud-based applications, as well as many security platforms, along with the natural extension of on-prem AD into Office 365, the potential security exposure increases – requiring more vigilant focus on the source of your security – your on-prem AD environment.

Most organizations focus on the periodic assessment of security (to get a sense of the current state of security), and the auditing of changes (to be informed when changes occur).

In the "parent" book to this mini-edition book, Conversational Hybrid AD Security, I pointed out that changes made to your hybrid-AD environment can occur daily. And those changes may be inappropriate and, potentially, impact your business. So, neither an assessment of the current state, nor auditing, will ensure security. The assessment is a snapshot of one point in time, so it doesn't help maintain security over time. And auditing alone just tells you something changed, but does nothing to define and rectify any unsanctioned changes.

So, it's necessary to put a focus on being able to both maintain a proper state of AD security, and have a plan to diminish the possibility to further bad changes in the future.

Which brings me to this mini-edition book. One of the major tenets in your hybrid AD security strategy needs to include an ability to retain control over some (or all) changes made to AD.

There are two key aspects to keeping a handle on AD changes:

Let's take a look at each and see how you can best keep your hybrid AD as secure as possible.

Since you're reading this book, I'm going to assume you probably have quite a few people who have the authority to manage some or all of AD. These are trusted individuals who have been delegated responsibility to keep all of the AD management off of one person's back.

So, why do you even need to think about remediation?

There are plenty of use cases where remediation would come in handy – accidental deletions, erroneous group membership changes, etc., But, at the end of the day, there are two simple reasons why remediation is needed:

Despite everyone's good efforts, changes may be made that are not sanctioned, and manually "undoing" a change may put you in a worse situation. These can be something as simple as an email change all the way up to adding a user to Enterprise Admins… and everything in between.

In either case, the goal is to return AD to a known secure state. In some cases, that "known" state means the baseline, while in other circumstances, it's more about undoing administrative actions that could put the company at risk.

Take the example of a trusted admin who has rights to create user accounts in their assigned OU one day creates 50 users in bulk in a newly created sub OU. Seems a bit odd – and it probably is.

Creating multiple accounts is a tactic used by external attackers once they have access to an account with permissions to manage some part of AD – they do this to establish persistence within AD. If you catch on to one account being a faux user for the attacker and disable it, the attacker still has 49 others lying in wait.

Or perhaps someone adds a user to Domain Admins – a group the organization has deemed off limits to changes.

In cases like this where security has been put at risk – and not just for the 50 users created or the group membership change you know about, but also for any of the other AD actions taken you don't – the best course of action is not to "undo" the changes (as you may not know every change made), but actually to get AD back into a state before the changes were made.

So, how do you get started?

You can't remediate what you don't know about. So, you first need an ability to know when changes are happening and be notified with as much specifics as are possible. Microsoft does provide a DIY solution infrastructure via a mixture of Directory Service auditing, Event Viewer, Custom WMI filters (to define what you're watching for), and tasks for email-based alerts (shown below). 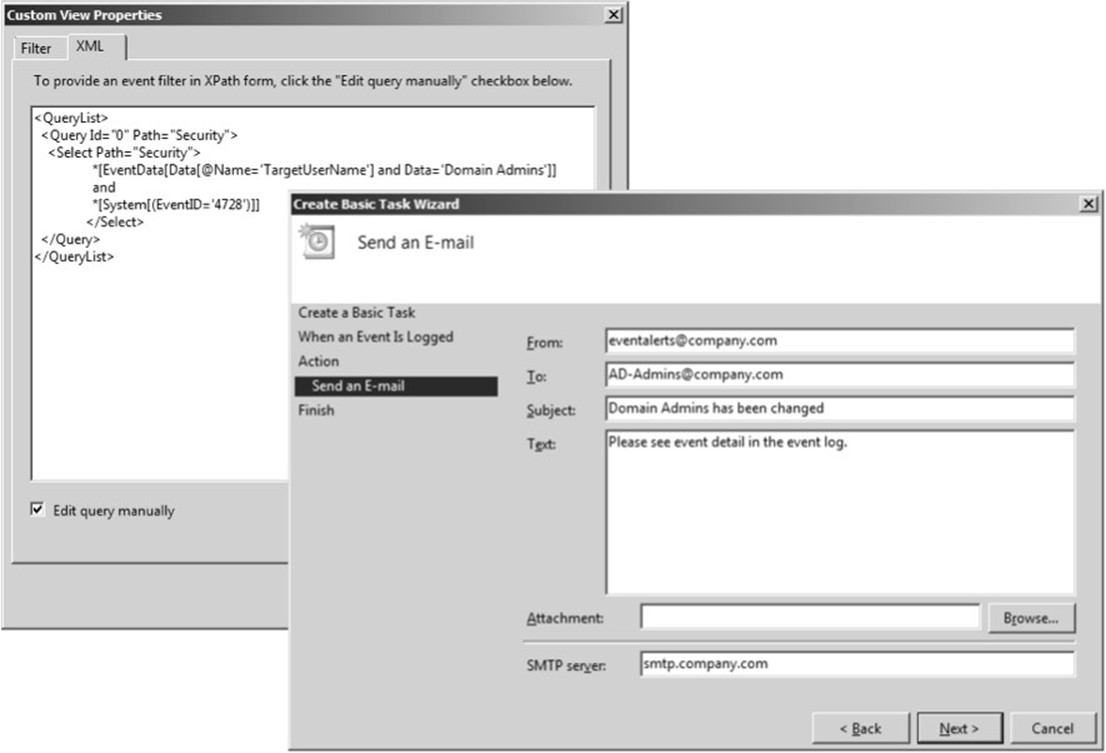 You might think "How am I supposed to know now what needs remediating? It hasn't happened!" True, but there are a few types of actions that you can build into your "Remediation List":

There are two ways of remediating inappropriate changes. Both result in putting AD back the way it was, but differ in their methodologies.

In cases where specific changes have been identified and need to be remediated, reverting of changes can be accomplished using a Rollback methodology. This normally involves a third-party solution, as there is no manual way to take frequent AD backups, store them, and select a specific object within AD to roll back.

In cases where changes are made, but IT is uncertain as to exactly what changes have been made (or the scope of the changes in question), a rollback isn't practical. Instead, a Recovery of some or all of AD is necessary to ensure the security and integrity of AD is reestablished.

Mitigation: Kicking Security up a Notch

For example, remediation doesn't scale. Sure, with an automated remediation from a third-party, you can remediate as many changes as is necessary. But, when you consider the number of people that may make inappropriate changes all because they aren't in IT, it becomes necessary to be a bit more restrictive. So, rather than reactively fix inappropriate changes, instead, you should take a more proactive stance using three specific techniques:

The key to mitigation is limiting the abilities of delegated users. Employing a least privilege model, look to establish roles and responsibilities – at a minimum, down to the OU and object level, and at a maximum, down to specific attributes. This should encompass what delegates can see within AD, which parts of AD they can manage, which object types, and what actions they can take.

Even with delegation properly implemented, there may still be actions taken by delegates that require oversite by peers, superiors, or IT. For example, to maintain security, group names need to conform to a standard or their purpose (and, therefore the privileges granted them) becomes unknown over time. Or membership changes to a group granting access to, say, your customer data may need approvals – or at least notifications.

In general, there should be some kind of policy around the following – and, when appropriate, a process for delegates to follow:

I've already talked about this from the standpoint of knowing when changes are made in remediation scenarios, but in a case where mitigation is the goal, auditing is still necessary. Even if using a third-party management solution, you'd want to keep tabs on changes made, to identify if an action is taken outside the third-party console. Additionally, for the purpose of change control, having that detail is critical to facilitate some form of remediation – should it be necessary.

There are changes made to AD every day in every organization that no one knows about except the person making the change. With the security of AD – both on-prem and in Office 365 – at risk, IT can no longer simple allow administration to run rampant without some levels of security controls in place.

Remediation and mitigation of inappropriate changes are all about having a way to know either actions are being taken or attempted, and having a way to rectify those actions – whether by reverting back to a known good state, or by stopping the action all together.

Having a plan to remediate and/or mitigate AD changes demonstrates an understanding of the criticality of establishing and maintaining AD in a secure state, as well as provides IT with complete visibility into when inappropriate activity occurs – and what was done about it.

Your AD is only secure if you keep it that way. So, having a way to be aware, control, and revert changes made to AD that put its security in question is paramount.

Quest offers solutions to put IT in the driver's seat – even when in a heavily delegated administrative model.

GPOADmin places a layer of control over the management of group policies. With an automated watchful eye over GPO changes, GPOADmin protects policies and policy settings from being inappropriately modified. GPO changes are backed up, allowing for manual and automatic remediation via rollbacks. Using workflows, accountability can be maintained, mitigating unsanctioned changes. Reporting and replication enhance IT's ability to both understand the impact of changes, as well as to ensure consistency throughout the entire AD environment.