Active Directory domains rely on synchronized time for a number of key operations. For example, all Kerberos messages passed between domain members and domain controllers have a maximum default lifetime of 5 minutes. This limitation is intended to make the messages useless to attackers who might capture the messages on the network; by the time the attacker is able to decrypt and modify the packet (if the attacker is able to do so at all), the message will be useless.

Active Directory replication is not especially time-sensitive and only uses timestamps as a tiebreaker in certain circumstances.

If time synchronization fails, the operations that depend upon it can also fail. For example, suppose a client computer has a local time of 10:00am, and its closest domain controller has a local time of 10:06am. Kerberos packets time-stamped by the client will be considered out of date by the domain controller even if those packets arrive immediately. The domain controller will reject the logon attempt, and the client will display a generic logon failure message— making it a difficult problem to detect without careful detective work. Understanding how the time sync process works is important to keeping the process running smoothly and solving any problems that occur.

Windows 2000 (Win2K) and later include the Windows Time (W32Time) service, which is configured as a standard Windows background service to start automatically and to log on as the special LocalSystem account. This service is a Microsoft implementation of a Request for Comment (RFC)-compliant Simple Network Time Protocol (SNTP) client and server.

The Windows Time service originally provided in the Windows NT resource kit is not compatible with W32Time. However, Microsoft makes an NT-compatible W32Time service, which allows NT computers to participate in Active Directory domain time sync. Obtain the updated service from Microsoft.

Computers that aren't members of a domain don't automatically synchronize time. However, because the W32Time service is a standard SNTP client, you can configure it to synchronize with any available SNTP server. To do so, simply double-click the clock in the computer's taskbar, and select the Internet Time tab, which Figure 7.1 shows. 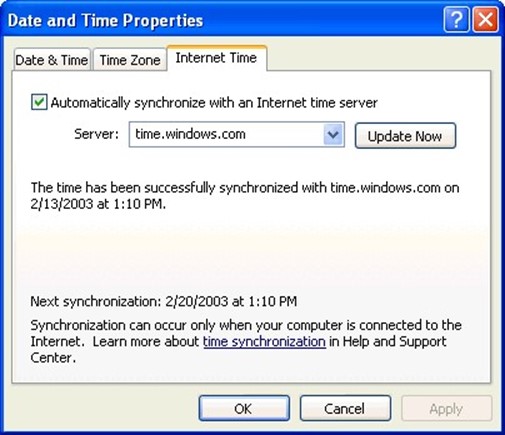 As Figure 7.1 shows, Windows XP Professional includes a number of preconfigured Internet time servers, including one made available by Microsoft. Other time sources include the official United States government time server at http://www.time.gov.

Obviously, time sync can only occur when the computer is connected to the Internet, so it works best if your computer utilizes an always-on broadband connection. However, Windows will automatically detect a network connection—such as a dial-up connection—and attempt time sync when necessary. By default, Windows attempts to sync about every 8 days.

All domain controllers holding the PDC emulator role will try to sync time with the PDC emulator of their parent domain. This behavior creates an easy-to-understand hierarchy of time sync leading up to the forest root domain's PDC emulator.

These attributes are ranked from most important to least important, and result in a selection preference something like the following order (from most preferred to least preferred):

Computers will never choose themselves to sync with. They'll move on to the next preferred source on the list, if necessary.

The US Naval Observatory is considered the United States' official source of time. The observatory maintains a cesium-based atomic clock that is the most accurate timepiece in the world. This clock is connected to several Internet-based time servers that can be used by the public (including ntp2.usno.navy.mil and tock.usno.navy.mil). Note that the SNTP protocol uses UDP port 123 by default, so your domain controller will need access to the Internet on that port in order to sync time.

If your network spans multiple time zones, you should always configure your forest root PDC emulator to synchronize with an authoritative outside time source. Doing so will ensure that your entire network receives authoritative time, and that time-dependent network operations will work as smoothly as possible.

When computers sync time, they don't necessarily make an instant, radical adjustment to their local clocks. Doing so could disrupt other processes, so the time sync process takes a more gradual approach.

First, the W32Time service exchanges network packets with its selected time source to determine network latency. Doing so provides an internal adjustment based on how much time is required for time sync packets to physically cross the network, and is measured in nanoseconds.

Time sync normally occurs about every 45 minutes by default. Once time sync has successfully completed at least three times, the period is extended to 8 hours, and remains at that setting so long as each attempt to sync is successful. If any attempt fails, time sync reverts back to 45 minutes.

Sync periods are more frequent than 8 days for computers that use the Kerberos protocol because time is so important to this protocol.