Chapter 1 reviewed the basics of certificates, establishing definitions for certificates and related technologies and processes. With this foundation, we explored the more technical and complex topic of subject alternative name (SAN) certificates. Chapter 2 pressed on to discuss the details of a SAN certificate. This discussion included examining the appropriate public key cryptography standards (PKCS) and comparing data between SAN and non‐SAN certificates. That chapter wrapped up by comparing SAN certificates to wildcard certificates to show the distinction between two somewhat similar objects.

In this final chapter, we will get back to the technical details by going through typical SANspecific public key infrastructure (PKI) scenarios in detail. Many of the sections in this chapter will enable you to take direct action to start using SAN certificates.

Quick Reminder About SAN Certificate Use

Normally, a PKI certificate specifies a single namespace where it is valid. By using the subject alternative name field, a SAN certificate can be valid for all of the listed namespaces. 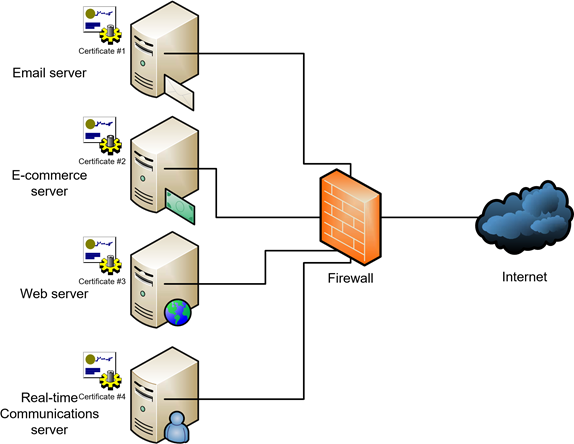 As we can see, this deployment has four servers, one of each, that will serve as our server archetypes:

You can see from the certificates that there are four specific certificates deployed. There is a different certificate on each system, and that certificate is unique to that server's identity and key usage. Note that for space and clarity, I have not listed each system's DNS name in the diagram; as an example, the names might conform to Table 4.1. 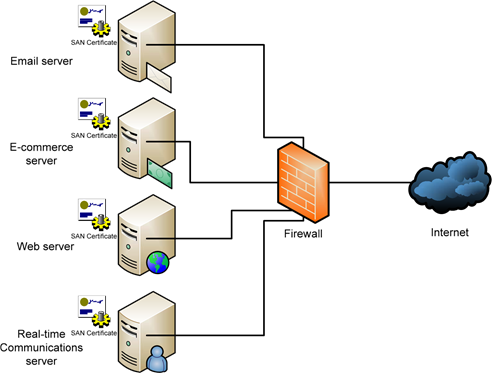 There are dozens of categories of PKI‐enabled applications, and easily hundreds of individual applications within those categories. So how do we know the best way to plan for each of them? The important aspect of planning PKI applications for SAN certificates is in understanding how each application uses PKI.

For example, let's take a look at email. Email volume, message complexity, security, reliability, and improved services and features have significantly increased over time. As a result, the load on email servers has increased. Today, very few organizations have a single email server. And most email servers and clients support PKI‐centric encryption based on long‐established standards and practices, such as secure sockets layer (SSL) for secure Web communications and IP Security (IPSec) for secure networking. In fact, in many organizations, the majority of certificates are usually deployed for secure communications.

More specifically, Microsoft's Exchange 2007 messaging server and Office Outlook 2007 client support SAN certificates to enable the deployment of a single, multi‐use certificate in several locations. We'll look at these in more depth later in this chapter.

The crux of this section is that you need to examine each service in your organization that supports PKI and determine whether it supports SAN certificates. At the time of this writing, only a few newer applications support them despite the fact that the subject alternative name field has been defined for years. For example, no version of Microsoft Exchange prior to 2007 supports SAN certificates. The older versions of Exchange only looked at the common name portion of the subject field. No matter what the subject alternative name field contained, it was ignored. Thus, although you could theoretically use a SAN certificate for that application, it would certainly not work as you would expect it to.

How to Determine Whether an Application Supports SAN Certificates

In general, there are three possible ways that an application will deal with a SAN certificate:

The fastest and most authoritative method for determining which of these three ways the application will deal with a SAN certificate is to ask the software manufacturer. Check their Web site, read their documentation, or talk to a sales or technical support representative. If their application supports PKI (and if it doesn't, you're already barking up the wrong tree), they will probably understand your question and have a ready answer for you.

If the software manufacturer is unable to provide an authoritative answer, you will probably have to test it yourself. Assuming you already have the software deployed in your organization, you may be able to test the certificate in your live systems during downtime or on a hot‐swap server. However, that isn't always a good approach. As a general rule, functional and compatibility tests like this should be done with offline systems to prevent any issues from affecting the production network.

A common software testing and verification method is to obtain an evaluation copy of the intended software and try out a SAN certificate on a test installation. Most large software vendors are more than happy to provide evaluation or test copies for this exact purpose. For example, Microsoft provides 120‐day evaluation copies of most of its server technologies including Windows Server 2003, Windows Server 2008, Exchange Server 2007, and Office Live Communications Server.

Most organizations are trying to do more with less these days. As a result, many dedicated test environments are being scaled back or eliminated. However, technology advances have made testing much easier with limited resources.

You've undoubtedly heard of solutions such as VMware Workstation and Microsoft's Virtual PC or Virtual Server products. These products allow you to run a virtual environment within another system at reasonable performance and system resource investments. If you're doing basic PKI testing, such as testing to ensure proper SAN certificate support, there is probably no reason to set up a large test architecture. You should be able to obtain evaluation copies of both the operating system (OS) and application, install them in a virtual environment, and test away. If you also use managed PKI or a third‐party CA, you can often obtain a limited‐lifetime test certificate to validate the technology before you buy the actual certificate.

Although virtual environment testing does not replace the need for full‐scale testing prior to enterprise‐wide deployment, it can very handily serve the purpose of validating behavior and applicability of SAN certificates.

Once you've got the test environment up and running, you should use the SAN certificate extensively to ensure that the same level of functionality exists with both a regular and a SAN certificate. Because this chapter focuses on PKI and not software testing, I will not provide an exhaustive testing methodology. There are numerous books and articles on the subject. You should use whatever methodology you find most effective for your software and your situation.

Using SAN Certificates in Your Environment

Once you've determined that your application supports the subject alternative name field of certificates, you are ready to begin planning for deployment. This process can be lengthy or short, expensive or cheap, simple or difficult. It will all depend on the plan developed prior to the deployment.

The gradual replacement of certificates has several benefits:

There are also several drawbacks of this approach:

In general, you should consider the rip‐and‐replace strategy to replace existing certificates with the new SAN certificate if there are other factors that contribute to the need to perform operations on all servers. The factors that might cause you to conduct a rip‐andreplace operation include:

If one or more of these factors applies to your environment, consider the rip‐and‐replace strategy. Otherwise, I recommend that you plan to replace existing certificates as they expire or as maintenance is conducted on each server.

The Danger of a Massive Certificate Deployment

On the surface, the rip‐and‐replace massive deployment of a new certificate seems like a great idea. Get it all over with at one time. But it can also be a dangerous venture. If your testing was not thorough, there might be deployment or compatibility issues with the new certificate. It may not work in the production systems. And without a fallback plan, you might find yourself unable to provide core services such as email and messaging. So before performing this type of deployment, ensure that you have thoroughly researched and tested the configuration and have a fallback plan of some type in case of disaster.

Microsoft Exchange 2007 supports PKI certificates for a variety of purposes:

Let's take a look at how to request a certificate from Microsoft Exchange 2007.

We'll use the Exchange Management Shell to create a certificate request at the command line. Although a bit cumbersome, it is the only way to ensure that the certificate request is complete and properly configured. As of the time of this writing, there is no user interface (UI) method for requesting a SAN certificate because there is no interface for adding the domain names that go in the subject alternative name field.

For this example, we will use the details provided in Table 4.2.

To create the request, follow these steps on the server running Exchange 2007:

This two‐step process will result in a certificate request saved in the file C:\ExchangeSANCert.txt.

The next step is having the certificate issued. This is normally done by sending the saved request file to a CA (internal or external) and completing the certification process as described in Chapter 3. At the end of the process, the CA will sign and issue the certificate and most likely send a copy to you in a p7b file.

Once you have the certificate, it is a simple process to install it. Just follow these steps on the server running Exchange 2007:

Once the certificate has been installed, the first thing you should do is conduct functional tests to ensure that the certificate works properly. For the example in this section, appropriate tests might include using PKI‐enabled features by performing these userfocused tasks for each of the subject alternative name domains:

Once these tests are successfully completed, you should back up the certificate and private key. Take care to ensure you make a complete backup by testing it on another system, then store the backup in a reliable and secure location. If the backup is compromised by an attacker, the attacker will have the private key for your messaging infrastructure (and possibly much more). If the backup is lost or damaged, and your original key is also lost, the cost and difficulty in having a new certificate issued and can be significant.

Compared with the Exchange processes, however, the operational processes for requesting and installing the certificates are amazingly simple. In fact, it's a wizard that comes up by default when you run the management console. The wizard generates your SAN certificate request automatically. Your only task is to send the request to the issuing CA and then install the returned certificate by double‐clicking it. Really, that's all there is to it!

SAN operation and maintenance is discussed extensively in Chapter 3. As a brief reminder, certificates require very little attention during their lifetime. For the most part, once you've installed and verified the configuration of a PKI‐enabled application, it will work until one of a small number of issues occurs:

When one of these issues occurs, you should quickly address it. The most common issue that you'll face is certificate expiration. PKI vendors understand this, and today many of them are recommending 2‐ to 3‐year certificate validity periods to help minimize the impact of expiring certificates.

The first two chapters covered PKI and certificates in technical detail. Chapter 3 departed from that type of content by focusing on the business aspects of certificates, and SAN certificates in particular. In this chapter, we looked at applied use of the SAN certificates. We discussed various planning techniques and details, and provided specific recommendations and guidelines for which approaches are appropriate for each situation. We then explored Microsoft Exchange 2007's use of certificates in some depth and showed specifically how it can be configured with a SAN certificate.

Throughout this series, you have seen the benefits of SAN certificates. Not only are they required for a number of advanced PKI‐based applications, they also simplify your IT infrastructure and can lower the cost of certificate ownership and management. Although some managed PKI vendors do charge more for SAN certificates, you now understand their value and how to calculate whether to make an investment.