The Power of Pervasive Personality

In 1995, John Gage is well known for having asserted that, "the network is the computer." And while that statement may have been a few years early for its time, it absolutely holds true today. In today's business IT environments, most applications are effectively useless without some connection to the network. Entire laptop form factors are available that are little more than network appliances. Interoperability between computer and network has grown to essentially make the individual device a localized extension of a much greater system.

To that end, businesses today leverage multiple ways in which their users can access that system. Individual desktops have for many years been installed in user work areas, with one user typically assigned one desktop for that user's business use. But with physical space now at a premium, collaborative approaches to solving problems are being used in ever greater amounts. More users are finding themselves working outside the traditional brick‐and‐mortar confines of the office. The traditional approach to "working at the office" is quickly becoming an outdated concept.

In support of these new work patterns, today's users make use of more and different computing devices that are spread across multiple locations. The devices themselves are changing as well, adding laptops, personal communication devices, and remote application infrastructures to the old and traditional desktop standard. 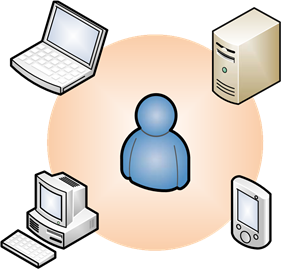 With this in mind, consider your organization today: Does this description sound like you? Do your employees interact with your network through multiple, varied, and unpredictable interfaces? Do they use these interfaces all at the same time? Are you provisioning applications across your intranet and the Internet in support of your employees' needs? Are your employees re‐creating their workspace within each device class, network location, and work environment?

In today's world of work, it is one thing to be personalized on one computer every day. It is yet another to enjoy a consistent personalization across multiple computers and methods of access.

Most importantly, with the right infrastructure in place, user customization elements can be combined with administrator‐driven policies that ensure the right resources are always available. As was introduced in the previous article of this series, your users' needs for a comfortable workspace must extend across each of the potential options available to them today. Implementing solutions that enable a pervasive personality across each of these interfaces is one way to make this a reality.

Use Cases for Pervasive Personality

Numerous use cases exist for justifying the benefits associated with retaining personality; let's focus on three specific ones that have a direct impact on a business' bottom line. No matter what size computing infrastructure you currently work within, these examples should be relevant to your operations today.

Every organization that uses computers has some internal process for refreshing those computers when problems occur or when new technology is added to the environment.

In the un‐automated version of this process, you can see how user‐specific configurations can easily get lost in the shuffle. Numerous configurations exist within the user's profile, application settings, and other areas on that system that make the process of transferring personality cumbersome. More importantly, the complexity of finding and transferring those personality elements adds a time cost to the refresh process, increasing the amount of time required to complete the process or adding multiple feedback loops when critical settings are not transferred during the first visit.

A pervasive personality system eliminates many of these challenges by decoupling the user's customizations from the OS itself. Those individual customizations are stored elsewhere on the network and transferred to the local device as the user begins work with it. When users make additional customizations, those changes are replicated to the external location through an automated mechanism. Thus, the only steps necessary to ensure that user data is retained during a refresh is to simply log off the user from the old computer and log on the user to the new one. This single step can automatically transfer personality information down to the user's refreshed computer, allowing the user to immediately return to work.

A second use case in which the re‐creation of personality information is often required is when organizations make the jump to remote applications. These applications, which may be hosted atop platforms such as Microsoft Terminal Services or Citrix XenApp, are initiated through a background login to a server in the data center. Although the application may appear to be running locally on the user's desktop, it is in fact running on a server somewhere else on the network.

Although moving applications from the desktop to the data center may improve the lives of the systems administrator, launching those applications now involves creating a new and additional workspace for the user. That workspace has the same requirements as the original one on the user's primary desktop, which means that the same user customizations must be re‐created in the un‐automated environment. Making this problem even more insidious—when users work with multiple instances of these environments, even more segregated workspaces are created.

Augmenting this environment with a platform of pervasive personality accomplishes the same goal as with the first use case. When personality elements are decoupled from the OS and stored elsewhere on the network, each individual application logon shares the same customizations. Users in this scenario are no longer required to re‐create their settings with each application infrastructure. Instead, those settings are transferred from a central store with each subsequent login, and customization changes are replicated back to that central store as necessary. With pervasive personalization, users see the exact same experience within remote applications as they do on their primary desktop.

The third use case that is particularly evident in today's IT environments is involved with the migration from one OS to another. Focusing on the Microsoft Windows OS in this example, the recent upgrade from Windows XP to Windows Vista or its follow‐on update is unique. In this particular upgrade, profiles between these two OSs are fully incompatible. Thus, any upgrade from Windows XP to another Microsoft OS can require an extensive and painful manual migration of settings from the old instance to the new.

It is possible to custom‐build scripted routines to migrate this information; however, doing so can be a complex development activity that is beyond the capabilities of your IT organization. Additionally, the cost associated with such homegrown development can make an upgrade prohibitively expensive.

Organizations that leverage the use of a pervasive personality platform for the other use cases in this article automatically gain the necessary automation for OS upgrades as well. Personalization elements are decoupled from the OS within such a platform, so the process to reapply those settings to a new OS version becomes trivial.

Pervasive Personality Improves the Effectiveness of IT

In this article, you should easily see how decoupling personality elements from individual instances of the OS can dramatically improve your IT organization's effectiveness. You can rapidly deploy new hardware when necessary, eliminating the time cost associated with troubleshooting complex problems. You can quickly spin up new server‐based applications and environments with the comfort that users will automatically retain their same level of experience. You can even reduce the overall costs and time delays associated with OS upgrades due to the potential for painless upgrades.

The final article of this series will discuss some of the technical aspects of such a decoupled system. There, you will learn how such a system might be designed and how it could be implemented in your organization today.